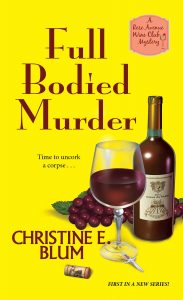 But when a neighbor is found dead, it’s up to her to pair the culprit with a deadly crime . . .

Leaving behind a failed marriage, New Yorker Annie “Halsey” Hall is ready to begin the next phase of her life in coastal Southern California. From the moment she arrives at her new digs on cozy Rose Avenue, she looks forward to joining the neighborhood ladies for their weekly Wine Club gathering. With only a rambunctious yellow lab puppy to keep her company, Halsey could really use a confidant—and a glass or two of her favorite white wine . . .

Unfortunately, she finds nothing but red at the Wine Club meeting—and judging by the dead woman lying face down in the backyard, it’s not spilled merlot. Halsey accidentally stumbled into the wrong address at the wrong time, and with suspicions about her past on the rise, she must prove that she isn’t a killer. Enlisting the eclectic talents of the Wine Club ladies, Halsey searches for the true criminal at large. But separating friends from foes isn’t easy on Rose Avenue, and as she racks up a suspect list, Halsey can’t shake the feeling that someone in her inner circle has a taste for murder . . .